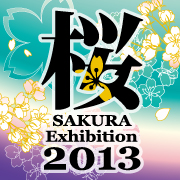 SAKURA (cherry blossom) has been loved by Japanese people since ancient times, and today it is well-known as a Japanese flower all over the world. "SAKURA Exhibition" to be held in the blooming season of SAKURA is a contest exhibition planned for the purpose of introducing Japanese artists to the world.

Guidelines.
Name of Exhibition
SAKURA Exhibition 2013
Theme
Free
(Grand Prize “SAKURA” will be selected among only works on the theme of SAKURA.)
Schedule

LOS ANGELES - JACCC
20 April – 12 May, 2013
Holiday: Mon
JACCC, Japanese American Cultural & Community Center, is the largest American Cultural center of its kind in the U.S. Information of the Exhibition in L.A. will be announced on Japanese news paper and TV. , also be updated on LA Japan Web.

Portugal – Museum in Lisbon (Not fixed)

Special Exhibition in LOS ANGELES - Norbertellen Gallery
To be held in July 2013 for a few weeks (Not fixed)
Planning Special SAKURA Exhibition for the 5th anniversary to display mainly prize-winning works in the past
Downtown LA Art Walk : Thursday July 11, 2013 @12-10pm
Open on Thurs, Fri, Sat and by appointment

Way of submission
Images should be shorter side at the top, saved as 300dpi, CMYK/RGB/Gray Scale, jpg, 3508Pixels in width, 4961pixels in height. Information of artist name, title of work, website URL, E-mail address is also necessary for display. For further information, please send a mail to